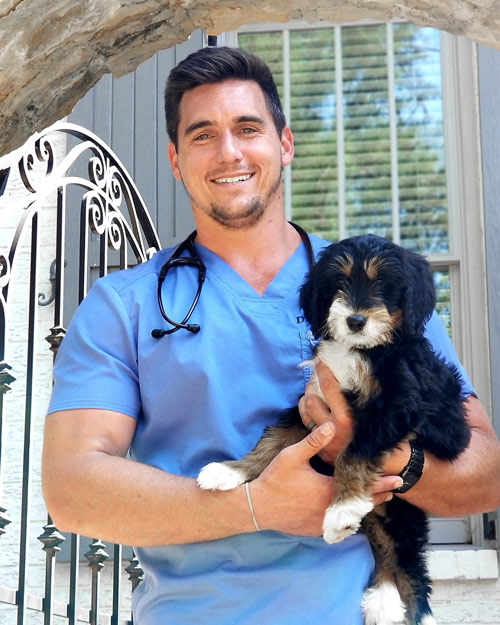 Dr. Eric Mueller was born in Cincinnati, OH but grew up in Chicago, IL, and Northern Kentucky. In Kentucky, he lived on a 15 acre horse farm, working and breaking Tennessee-Walkers and Rocky Mountain horses. Eric attended the University of Kentucky from 2003 to 2007 where he played Division I football and received his Bachelors of Science in Animal Science. After graduating from the University of Kentucky, he then attended Auburn University from 2007 to 2011 where he obtained his Doctorate of Veterinary Medicine. While at Auburn, Dr. Mueller was a Small Animal Emergency Student Resident and discovered his specific interest in surgery. In and along the way, Dr. Mueller has provided veterinary medical relief for the Gulf Oil Spill in 2010 and completed a preceptorship program at two veterinary clinics in Alpharetta, Georgia. He then became licensed to practice veterinary medicine in the great state of Georgia and has been providing small/companion animal medicine in North Atlanta since June of 2011. 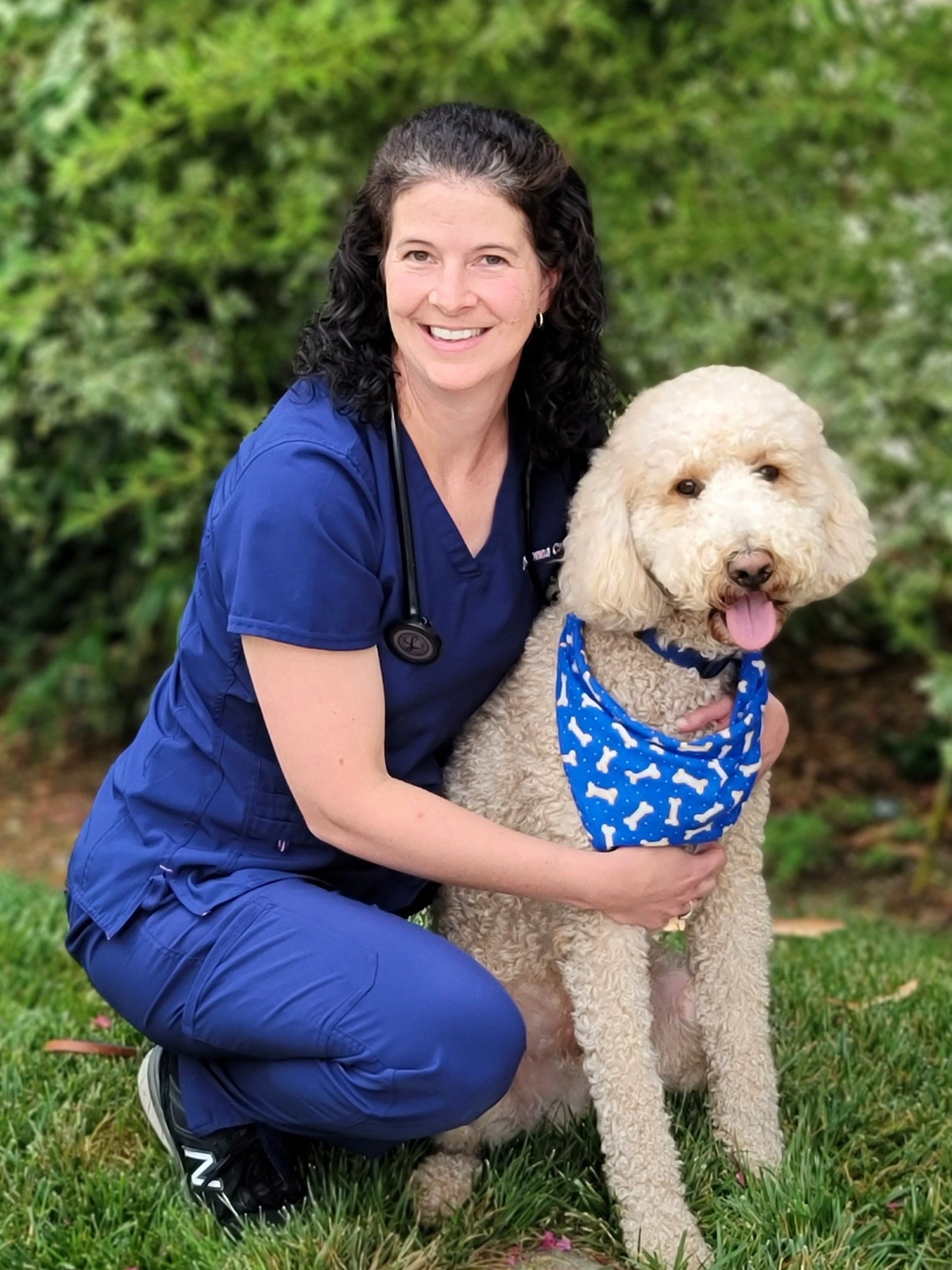 Dr. Donna Carson is a Georgia native and grew up in Conyers on a small farm. Donna knew very early on that she wanted to become a veterinarian one day and so she started working at the local veterinary hospital when she was 17 years old. She then attended the University of Georgia for her undergraduate studies from 1999-2002 and was so exceptional that she was accepted early into University of Georgia’s College of Veterinary Medicine. Dr. Carson received her Doctorate of Veterinary Medicine from the University of Georgia in 2006 and immediately started practicing small animal medicine in Alpharetta, GA where she has spent most of her career. Her interests include advanced internal medicine, animal behavior, and exotic animal medicine. Dr. Carson and her husband, Matt, have two daughters, as well as numerous pets including Norman the golden doodle, Stuart the cat, parakeets, and countless fish. When not working, Donna enjoys coaching her daughters in fast-pitch softball and spending time at the horse barn. Dr. Carson is very excited to join the Mt Paran Animal Hospital team as the ‘Head Medical Director’ while the practice grows and services the community in the heart of Sandy Springs. 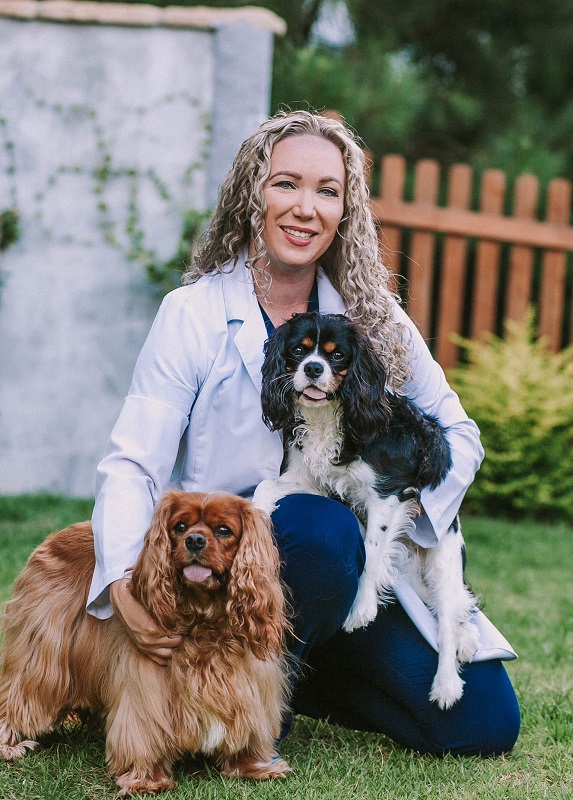 Dr. Carla Politte grew up in the small town of Elba, Alabama. She graduated with a Bachelor of Science in Biology from Troy University in 2007. She then went on to pursue her Doctorate of Veterinary Medicine from Auburn University and graduated in 2011. After graduation, Dr. Politte practiced in northwest Florida for 7 years before moving to the Atlanta area in 2018. Her special interests include soft tissue surgery and dentistry. Dr. Politte and her husband Elliott live with their three Cavalier King Charles Spaniels: Aria, Archer, and Woodhouse. In her spare time, she loves to travel and exercise and is also an avid reader and gamer.

Dr. Lauren Dempsey grew up in Ohio as well as Alpharetta, GA, so when it came time for her to pursue an undergraduate degree, she decided to return to Ohio and pursue a degree in Zoology from The Ohio State University. After graduating she then returned to Athens, GA, to pursue her Doctorate of Veterinary Medicine from the University of Georgia College of Veterinary Medicine. Upon graduation from veterinary school, she decided to venture back to the Midwest and spent 7 years in Chicago, working at a large 9 doctor practice in Lincoln Park. Dr. Dempsey’s specific veterinary interests include dentistry, internal medicine, and feline medicine. She recently made the move home to Georgia and works relief shifts regularly at Mt Paran Animal Hospital and other animal hospitals in the Atlanta area. When she’s not working, she loves traveling, reading, hiking, and exploring Atlanta’s food scene.

Dr. Elizabeth Pettit is an Atlanta native, born and raised with a passion for animals. Ever since she can remember, she wanted to be a veterinarian and even dressed up as a veterinarian for career day in kindergarten. Dr. Pettit studied Biology at the University of South Carolina from 2013 to 2017 and then went on to pursue her Doctorate of Veterinary Medicine at the University of Georgia. During vet school she worked in the rehabilitation center with birds of prey and in the Canine Research Center. Her specific veterinary medical interests are feline medicine, internal medicine, and orthopedics. Dr. Pettit is a member of the American Association of Feline Practitioners and is Fear Free certified. She has been practicing veterinary medicine in the Atlanta area for the past several years, has experience with more complex surgical and internal medicine cases, and works regular relief shifts at Mt Paran Animal Hospital. Outside of work Dr. Pettit enjoys hanging out with her 4 cats: Binx, Dorito, Pearl, S’mores and 2 dogs: Layla and Tucker. She also loves traveling and working in the garden. 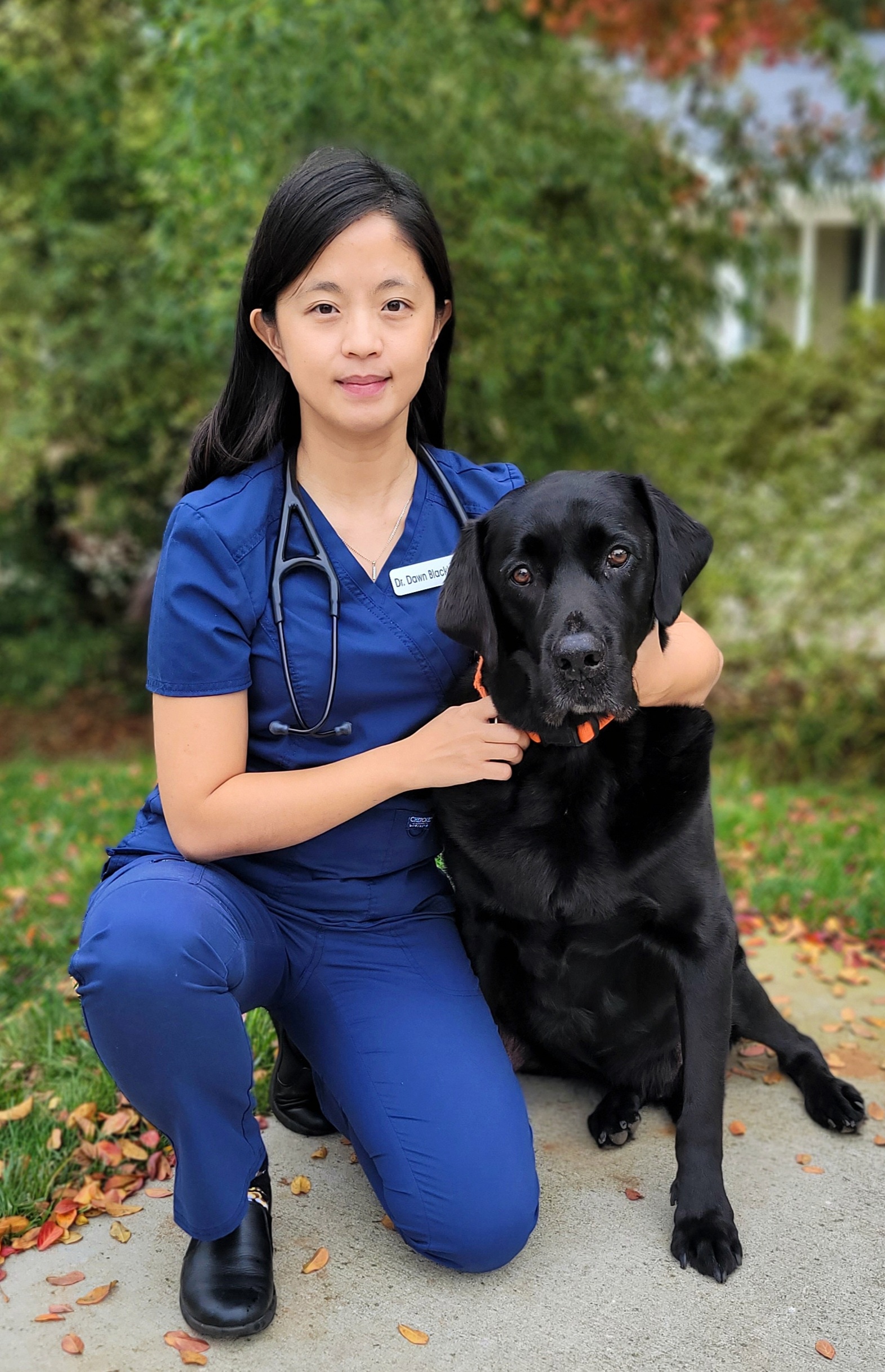 Dr. Dawn Blackburn grew up in Singapore and has always had a love for animals for as long and she can remember. Dr. Blackburn holds a Master’s of Science in Veterinary Epidemiology & Public Health from the University of London in the United Kingdom. She then graduated from veterinary college in Australia in 2010. She is also board certified in veterinary preventive medicine. She spent several years in Australia working in mixed animal practice seeing all creatures great and small, including kangaroos and other marsupials. She then moved to Florida in 2014 and has been in small animal practice ever since. Dr. Blackburn now works in public health and has made Atlanta her home, where works relief regularly at Mt Paran Animal Hospital. Dr. Blackburn’s specific veterinary interests include internal medicine, public health and preventive medicine. Dr. Blackburn and her husband, have a very spoiled geriatric cat named Mica (who moved here all the way from Australia!) When not working, Dr. Blackburn enjoys traveling, hiking, camping, and kayaking.

Accessibility by WAH
Call Us Text Us